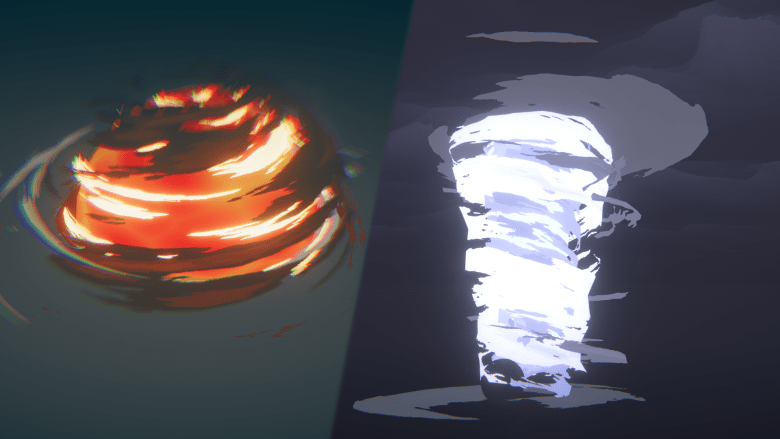 Recently I started experimenting with VFX and my 2 first entries on the field were 2 pretty standard concepts: a tornado and an explosion. Actually the whole idea of getting into VFX dawned on me after watching an awesome VFX tornado by Spyro. So I tried approaching VFX my own way, with my existing assets/shaders and knowledge, and started with these 2 simple concepts, with a style I had in mind which was similar to the waterfall shader I covered before.

In case you missed it, the tornado turned out something like this:

By now, you’ve probably figured out that it’s all about layering stuff, and this effect was no exception. It’s a combination of 3 distinct effects (4 if you include the clouds, which I won’t cover here): the tornado core (which consists of 4 meshes using the same shader), the top and bottom spiraling planes (can’t think of a better description) and the particle system on the bottom.

The only custom mesh I used, looks something like this:

It’s nothing special, I did however make sure the UVs cover the whole square, so that the noise texture tiles as it pans on it.

I made a custom shader for the tornado which does the following effects:

Takes a noise texture and pans it in both axes according to a given speed.
Takes 2 HDR colors and, after rounding the texture’s values (like in the waterfall), lerps between them based on the banded value.
Displaces the vertices of the model based on the noise texture (white = outwards, black = inwards).
Uses a cutoff value to clip the pixels according to the texture’s grayscale value (without the rounding, for more values).
To get a better idea, each of the 4 layers of the core look like this:

Each layer has a different material with different colors, amount of clipping, scaling and vertex displacement power.

An important factor to get this look was the noise texture, created in substance designer: 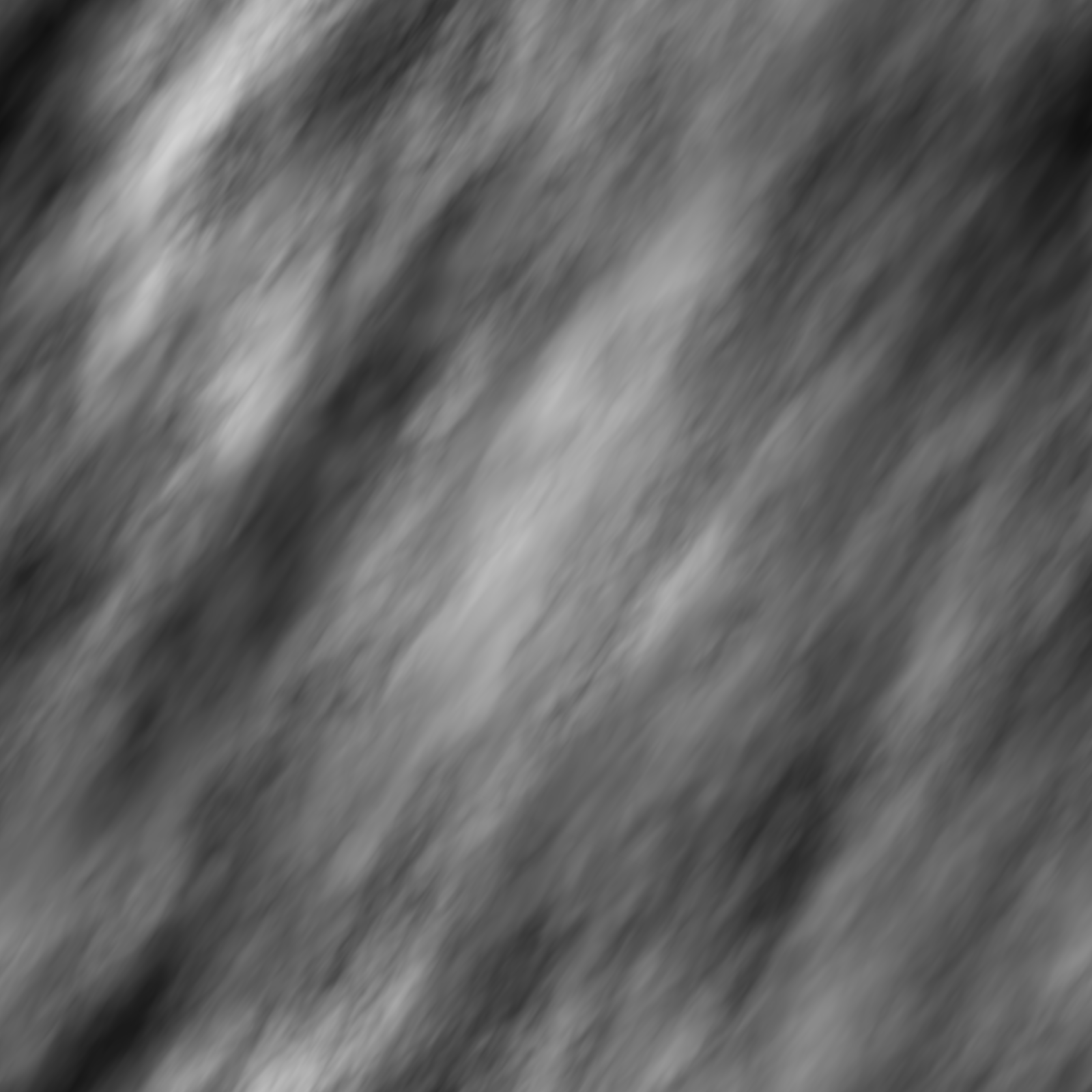 Since I pan the texture in both axes, having a noise texture that was tilted 45 degrees like that was imperative to having the tornado swirling look.

The planes on the top and bottom of the tornado, while not fitting without a context (and the sky is not really fitting to the scene), contribute significantly to the impression of the sucking power of the tornado. They use a shader which is more or less the exact same as the tornado core, but with one big difference: they sample the noise texture in polar coordinates. That way, they give the impression of the texture being sucked towards the center, like a portal. That’s obviously why using polar coordinates is common to portal effects.

The more keen-eyed of you might have seen the shader before; it’s the one from that waterfall shader I mentioned above. The shader for them is explained and written in the second part of the tutorial so you can check it there!

Just to see it a bit better, here’s the effect without the animations:

You probably guessed it already: it’s a bunch of layers. No more than the tornado too. Here there are 3.5 distinct effects (3.5 because there are just 3 different shaders but one is used differently and on a separate mesh): The inner core of the explosion, the outer layers, the bottom spiraling plane and the outer air layers.

While this was a separate shader, the principle was the same: Noise texture that pans with some speed, used for both coloring by lerping between 2 HDR colors (no banding here though) and for displacing the vertices. 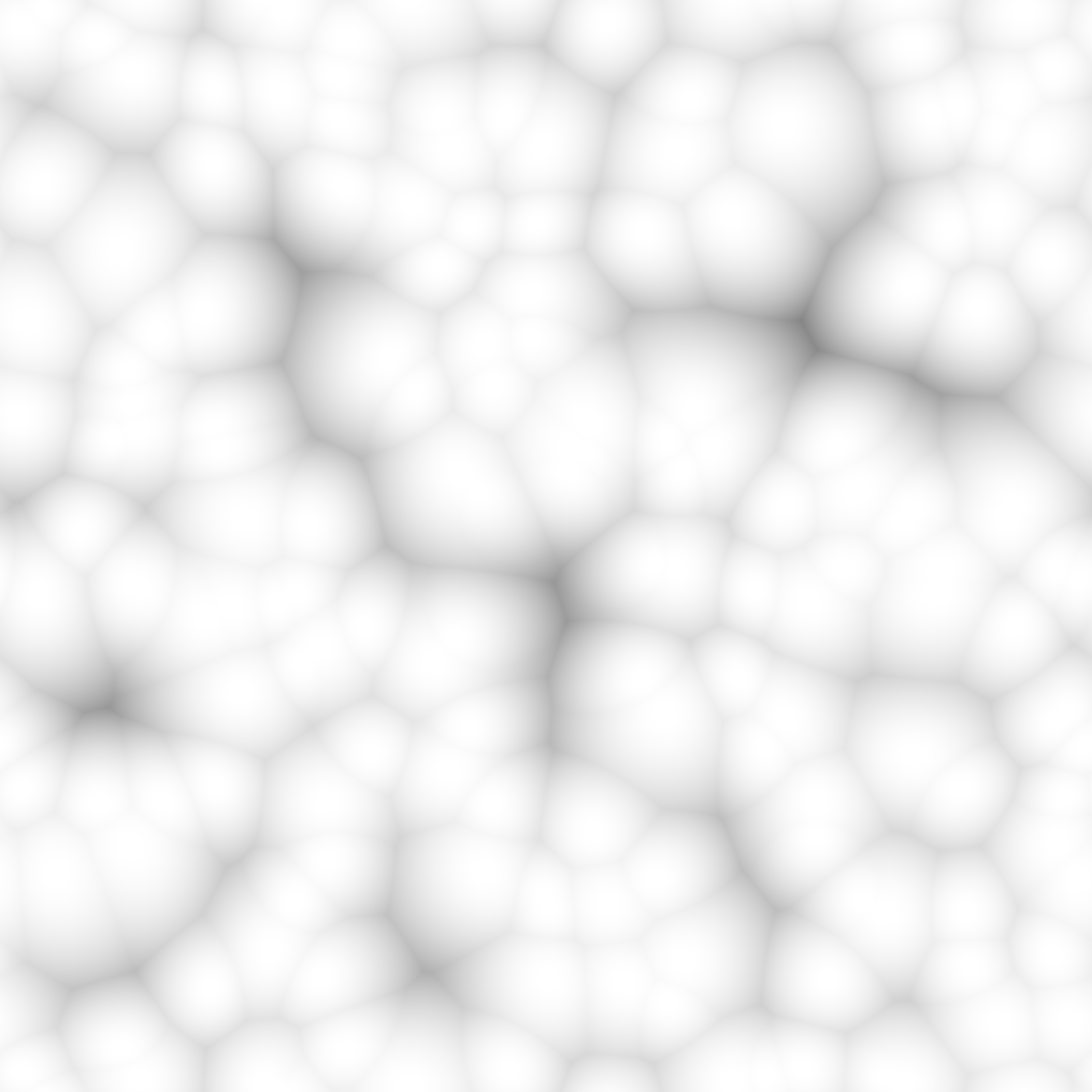 There are 2 outer layers, using the exact same shader and setup as the tornado layers. Easy to figure out when you see them away from each other:

Having them pan the opposite way really contributes to the chaos of the explosion, at least for me.

FYI, all these meshes are spheres, they just have a plane hiding the rest of the mesh.

No surprises here, it’s the exact same thing as before.

Just for this one, I’ll remove the ground plane to see what’s going on:

Yes, it’s the tornado mesh with the same shader. I’m that lazy.

Clearly most of the work went into animating the thing, to have a somewhat nice feeling on the impact and the timing. Lucky for me, I have a custom tool I made that takes care of simple “programmer” animations, using coroutines and such.

With that tool I can move, scale, rotate transforms, but I can also change the color of sprites/UI elements and (the more underutilized feature which I loved for this effect) change the property of a material. I can also sequence the aforementioned animations, delay them and make them use specific easing curves (or custom ones). It’s a handy tool, but right now it needs a massive refactoring and major UI/UX improvement cause this is an editor that only I can love: 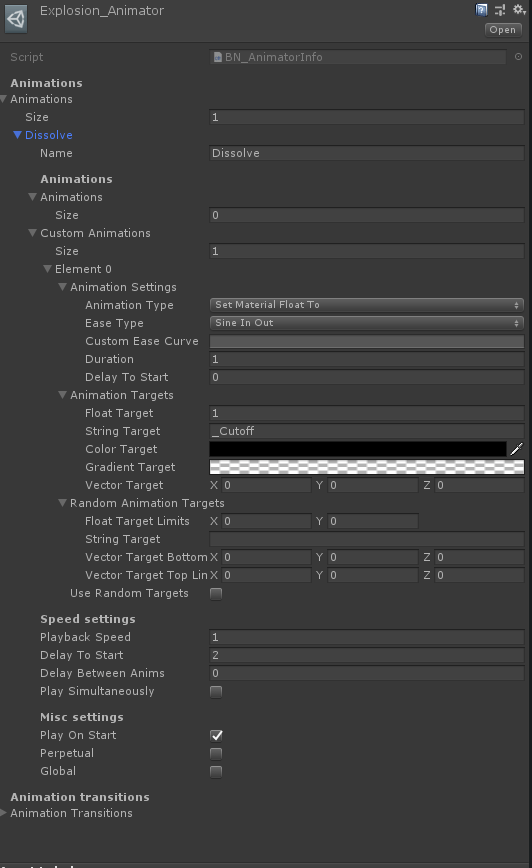 The good thing is that all the aforementioned shaders have a “_Cutoff” property, so it was easy to dissolve the effect over time, while also scaling it.

To give more of an impact during the explosion, I used a custom shader for radial blur, for which I also happen to have a tutorial with the code right here. Lucky you! I do have to note that I’ve added a slight chromatic aberration effect on the existing shader though.

Here’s a comparison of a screenshot with and without the radial blur: 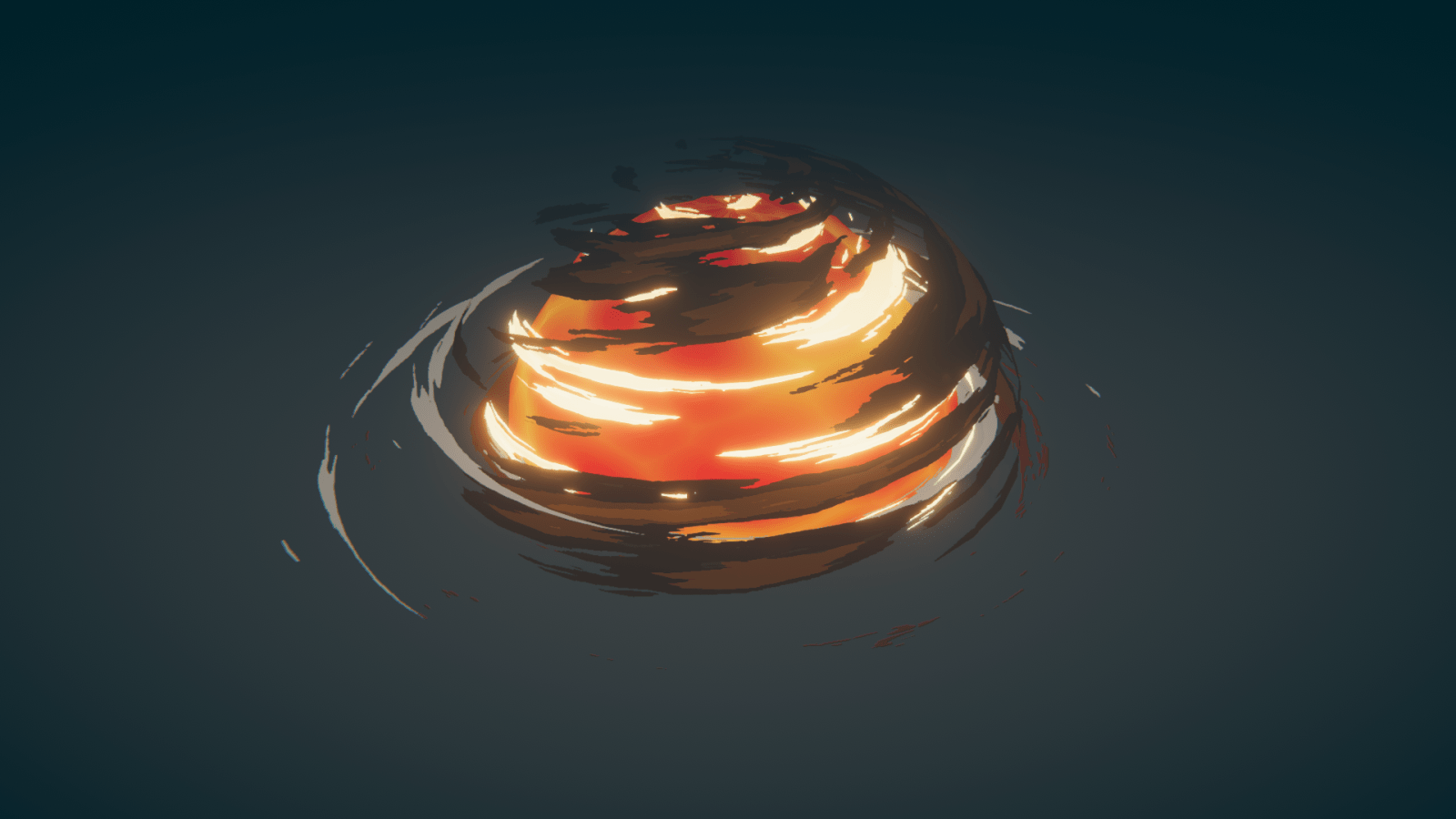 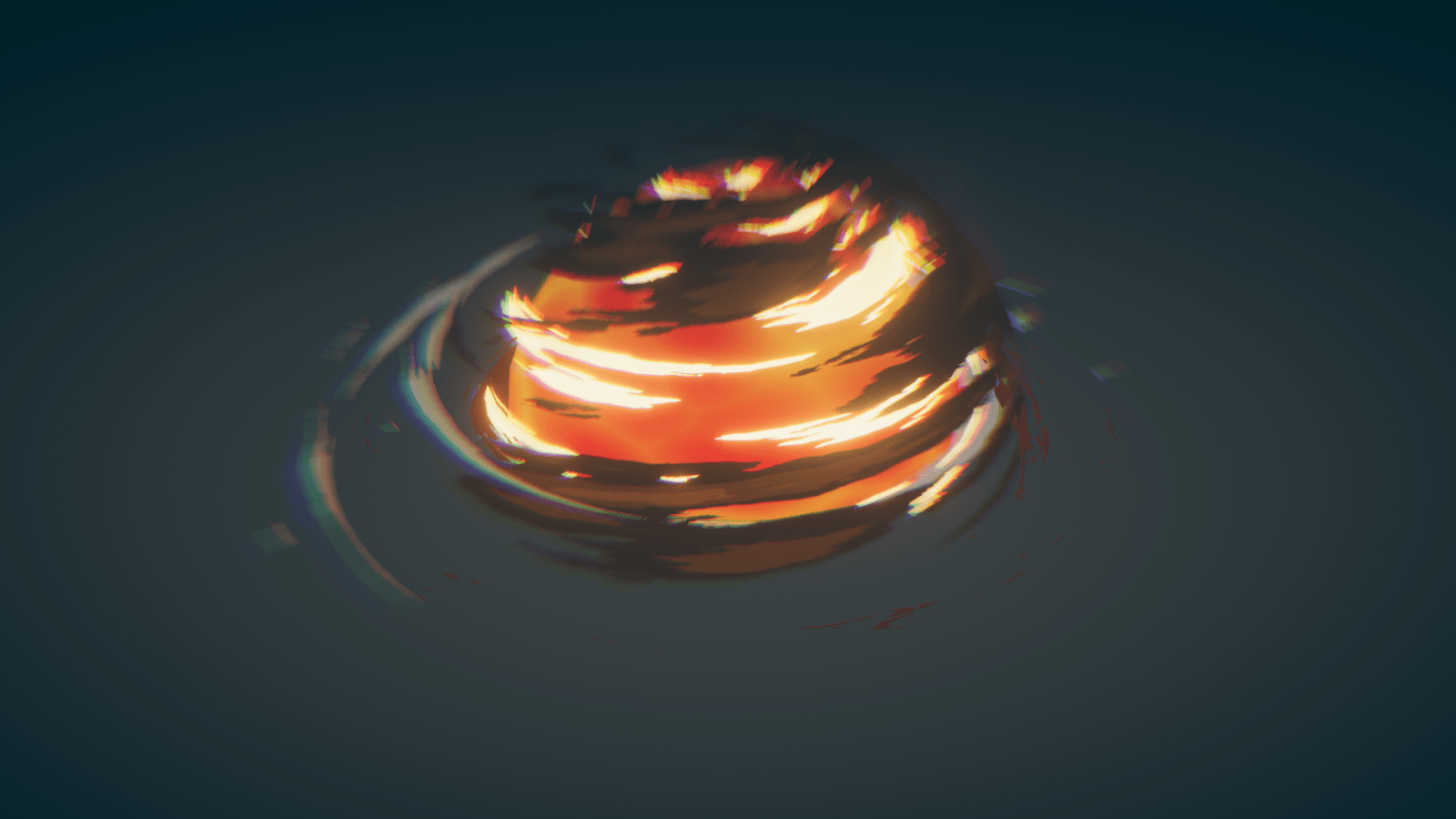 And that’s it! Hopefully this breakdown gives you a good idea about how to achieve similar effects! For me these little experiments are super fun and I want to explore what else I can do with these simple techniques and shaders. Until then, see you in the next one!

These posts will never go behind a paywall. But if you really really super enjoyed this post, consider buying me a coffee, or becoming my patron to get exciting benefits!